Let's Bring Healing to the World!!!

Good Morning Everyone,
May God's blessings be continually upon you!! It is with joy and pleasure that I inform you of GREAT NEWS! My next book, Shh Don't Tell, will be released nationwide July 2013! I am excited as it is VERY different from the Get Your JOY In The Morning! book and daily message. Yet, insightful. This book is near and dear to my heart because as a survivor of childhood sexual abuse, it takes a great amount of courage to even talk about the subject. I applaud the survivors who shared with me for this book. I pray that if you know anyone who is a survivor and you yourself interact with a survivor, are a parent, etc, that you will take an honest look at this heartfelt work. Tell everyone you know to be on the look out because it could mean healing for someone living with an unspeakable pain and greater understanding for those who love the one living with the pain. I have attached a copy of the cover. Pass it on and let's bring healing to the world!!!
GLORY TO GOD!!! 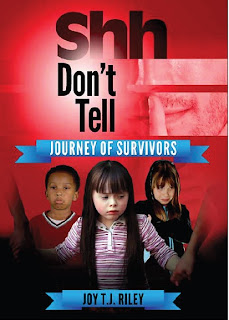 Posted by Get Your Joy In The Morning! at 7:12 AM No comments:

Labels: Get Your JOY In The Morning, healing, sexual abuse, Shh Don't Tell

Who is Filling Your Jar?

John 2:7
7Jesus said to the servants, "Fill the jars with water"; so they filled them to the brim.
Jesus had not yet revealed to the public his true nature and mission. Jesus was at the wedding banquet which his mother and the disciples were attending. They were the only ones who knew Jesus' true nature. Yet, even they did not fully know. During the wonderful celebration, it was found out that the wine ran out. Mary immediately went to Jesus. She knew Jesus could fix the problem. Jesus of course wasn't looking to be involved but Mary opened the door. So Jesus said to fill the jars with water. And once they were filled, Jesus said to draw or pour some out for the master of the banquet. At the pouring out, it became tasteful wine which was better than what they had.
How many immediately go to Jesus to fix the problem? Remember Jesus prefers an invitation, you must first open the door. The servants did not fill the jars a portion of the way they filled them to the brim. They filled the jars til there was no more room. According to the NIV Study Bible, the reason there was so much water present was because the water was for ceremonial washing. Remember the Pharisees believed that if one washed or poured water on their hands, they would be made clean. But the word "filling" takes on greater importance in this scripture. Though it was a simple miracle Jesus demonstrated in the miracle what He later said to the Pharisees. What went into the jars was clean and fresh water. Therefore, what was poured out or came flowing out was better than what everyone had received prior. Filling your jar when Jesus says to fill it and filling it with what Jesus says to fill it with, is a guarantee that when He gives you the order to pour out, to speak, to move forward, you will do so and it will be the best of the best. Who is filling your jar and with what? Who you turn to in order to fill you will determine what comes out.

Habakkuk 3:19
19The Sovereign Lord is my strength; he makes my feet like the feet of a deer, he enables me to go on the heights.
Habakkuk the prophet made a petition or request to God. In his prayer which was much like a psalm, he recounted God's wonderful deeds including his ability to save His people many times from the wrath of enemies. Each time the enemies of God's people thought they were ahead and were going to win, God showed up in a mighty way. Habakkuk also talked of rejoicing in the Lord no matter the situation, even while the enemies attempt to attack, even when it does not look like there is hope. The Lord provides strength. And Habakkuk describes that strength to that of the feet of a deer.
According to the Wikipedia encyclopedia, deer can range in weight between 20-1,000lbs. Their bodies are compact and they have long, powerful legs. They are excellent jumpers in terrain and swimmers. Deer live in woods, large forest and mountains. Their powerful legs and feet allow them to move to great heights. As enemies approach, the Lord gives us strength to move like a deer to surpass enemies. It may not look like it right now but rejoice anyhow. Because surely God will deliver you.

Matthew 14:27
27 But Jesus immediately said to them, "Take courage! It is I. Don't be afraid.'
During the night Jesus walked on the water to get to the boat the disciples were in. The disciples swore they were seeing a ghost because no man could walk on water. Jesus is no mere man. To calm their nerves Jesus told them to take courage and to not be afraid. For it was only Him, the one they knew. As much time as Jesus spent with the disciples performing miracles on the sick and feeding 5,000, it took  a midnight hour event for them to believe Him as the Son of God. And it is says they worshiped Him.
Has Jesus ever performed a midnight hour event in your life? With all that Jesus has done for you, was it the midnight hour event that caused you to believe that Jesus was and is in your corner? Did you worship Him then? Has Jesus repeatedly told you to not be afraid? Has He said, "It is I?" When Jesus says to you, "don't be afraid", it's not mere empty words. He says it because He has you no matter what you see around you.

Posted by Get Your Joy In The Morning! at 7:04 AM No comments: