Good Evening Ladies and Gentlemen,
It gives me great pleasure to share with you that I will be at the African American Author's & Empowerment Expo THIS Saturday, August 15th in the Baltimore area.  There will be books and workshops for the whole family. I will be giving away a FREE children's coloring book with the purchase of my second book, "Shh Don't Tell." Get Your JOY In The Morning will be available too. I will also be making a MAJOR announcement! I look forward to connecting with you! See the flyer below for details. 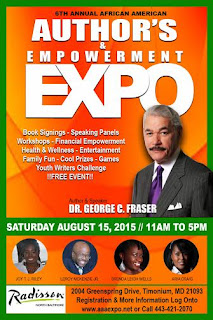 "A Game of Focus"

In the film, Focus, starring Will Smith, Will plays a conman, a thief, named Nicky. In the film he teaches a young woman, named Jess, a few "simple" tricks on how to steal from people. He said, "stealing is a game of focus. The mind is slow and can only focus on one thing at a time. If I draw your attention to my hand or whatever I'm looking at, you can't see where my hand is." Nicky then gives a physical demonstration as he with one hand has Jess look at it with him while with his other hand he snatches a possession from her person. Now Jess was able to utilize the techniques later under the direction of one of Nicky's partners. There was a team of them.
God had me remember the scene in particular because of some events which happened recently. When I recognized the scheme and called it out for what it was, the enemy literally sent something else as an additional diversion. The hope was that I would forget what God said would be happening. Why am I sharing this with you? Well, Jesus said Himself what the devil's tactic is. For someone reading this, God is doing something and the devil sent a diversion hoping you will focus where he wants you to focus so he can attempt to take the blessing God has given you right off your person. However, God ALWAYS has a "contingency plan."
In the film, The Devil's Advocate, starring Al Pacino and Keanu Reaves, the devil is played by Al Pacino and goes by the name John Milton in one of his human forms. And Keanu plays Kevin Lomax. In There is a scene on the roof top with a strange waterfall. John Milton was "interviewing" Kevin Lomax for a lawyer position. John said to Kevin, "I'm wondering about how you will be under pressure. For some people, when you apply pressure, they focus. Others they break." In the word, God says He uses everything referencing Romans 8:28. So basically the pressure, diversion, distraction that the enemy attempts to use as a method to break you and steal your blessing, God turns it around because He knows you better than the enemy does. He knows the pressure, the diversions, the methods of thievery will only cause you to focus that much more if you are willing to listen to Him. Are you focusing? If you focus, Jesus will give you the strength to smack away the hand of the enemy as he attempts to put his hand on what does not belong to him, whether it be a physical possession/blessing or that of your peace, joy, etc. FOCUS!

Posted by Get Your Joy In The Morning! at 9:33 PM No comments: