ROOTS Sunday "Your Name is Your Shield" Event in Laurel, MD

This is a FREE event co-sponsored by Get Your JOY In The Morning! LLC, the Performing Arts Center for African Cultures and Agape Life Ministries. It is open to EVERYONE. This event is to coincide with the airing of The History Channel's ROOTS Reimagined starting Memorial Day. There will be portions of the film shown, a discussion on the importance of history, knowing your name and hopefully the reading of youth essays which were entered for Cash Prizes at www.rootssunday.com/studentessays. PLEASE register via getyourjoyinthemorning.com on the contact tab to attend or by email at getyourjoyinthemorning@gmail.com.
​ 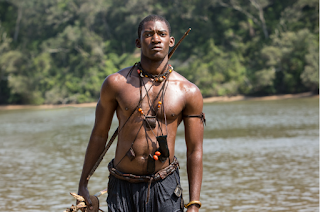 Posted by Get Your Joy In The Morning! at 4:56 PM No comments:

#ROOTS Sunday "Your Name is Your Shield"

On May 30th - June 2nd, 2016, something very special will happen: The History Channel will air a new imagination of ROOTS for the first time on 40 years. I would love to invite you and your congregation to be a part of this.

As you know, ROOTS first aired in 1977, and immediately shook the world. As we approach the 40th anniversary of the original series, an amazing cast - Forest Whitaker, Anika Noni Rose, Laurence Fishburne, LeVar Burton and more - are joining with HISTORY to reimagine ROOTS for a new generation.

Prior to the May 30th airing, churches around the country are participating in "Roots Sunday" on Sunday, May 29th. To participate, churches agree to do at least one of the following:

Posted by Get Your Joy In The Morning! at 6:26 PM No comments:


7Beloved, If God so loved us, we also ought to love one another.


Several weeks ago I was serving at an event. I had stopped to take a break. While there, a younger man approached me. He appeared to be a student. We spoke for a few minutes. Then he asked, "Why are you so happy?" I immediately responded, "because of Jesus." He retorted, "Wow. You didn't even hesitate." I said, "No. Why would I?" He proceeded to name other reasons. What I didn't know at the time was it was a test. The young man already knew Jesus. He played as though he didn't know Jesus to see what I would say to evangelize someone. But within five minutes he let it slip out that he studied the Bible. He said he goes around and asks questions to see what people know. He admitted that he had newly come into Christ and had been vigorously studying the Word.


We had a great conversation. The younger man said he would return to speak more. Upon his return, when he learned something that was not advantageous to him he began to interrogate. As to say that others faulted where he succeeded. At any rate, as he began to ask who would go to heaven and who wouldn't, I noticed something the Lord showed me in the first conversation. I refused to engage in the conversation further and stopped with the following, "Jesus said the greatest commandment was to love God with all our heart and our minds and the second is like it which is to love thy neighbor." I politely looked him straight in his eyes and said, "As you continue to grow in Christ, you will learn this my friend, love first, salvation second." He wanted to debate. I said there is no debate. Be blessed and proceeded to go back to serving.


The Great Commission Jesus gave applies to all of us which is to evangelize. However, the main ingredient is love. The chapter most quoted about love says without love you have nothing. When the adulterous woman was brought to Jesus for condemnation, did he condemn her? No. He simply used love as the way to reach her. Yes, knowledge and salvation are important. But if we, as the body of Christ, cannot show people love, what reason do they have then to accept salvation? The true meaning behind salvation is love. Leading with love leads to salvation. It's great to have Biblical knowledge and yes the Word says we are to study and show ourselves approved. However, the word also says that if we say we love God but do not love our brother then we are not being truthful. God is love as the Word says but God is also truth.


Maslowe's Hierarchy of Needs in psychology says that love is one of the most basic need that every human being has just as water, food and shelter. God created us that way. Unfortunately, so many lack love to the point they think they are unlovable. So if you don't love you, and the word says to love thy neighbor as thyself, then the result is many treat others the way they've been treated or the way they see themselves. Hence the manifestation of abuses such as sexual abuse/assault, physical/domestic abuse, verbal or emotional abuse, spiritual abuse, financial abuse, reproductive abuse, manipulation, etc. None of these abuses conveys love. They actually convey a desperate need for help and resolution. However, lacking love does not justify the shedding/harming of innocent blood whether in the natural or in the spirit. We ALL have access to love. That love is God, if only we would seek. Love first. If you don't know how, God can and will show you if you seek.

Posted by Get Your Joy In The Morning! at 9:28 AM No comments: