While you were sleeping, our movie, "The Empty Walls," was mentioned in a  USA Today article. We're raising the bar! Here it is: 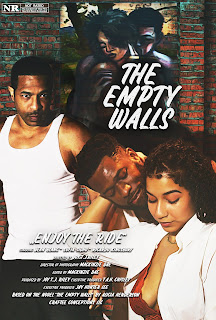 #theemptywallsmovie #indiefilm #bookstofilm #raisingthebar #usatoday
Posted by Get Your Joy In The Morning! at 8:50 AM No comments:

I have been quiet for a minute because I have been busy. I have two announcements!!

1.  "Broken Pieces" has been picked up by Cinistream! Please see the screenshot below. 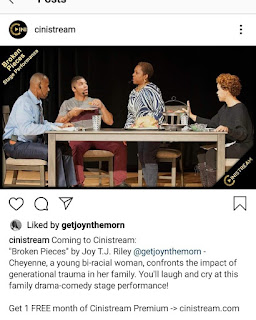 "Thank you for sharing the tweet, and for sharing your wonderful project with our platform! It really brought some smiles (and a few tears) to our faces!"

2.  I am working on a film project "The Empty Walls." Check out the production website  https://www.theemptywallsfilmfranchise.com/  as well as the IMDb (Internet Movie Database- the entertainment industry's go to database for film, television and gaming) title page "The Empty Walls 2021" which lists the cast and crew connected to the movement.

Thanks for your support!! YOU ARE TREASURED!!

I have spent the last two plus hours watching a documentary film titled "LA92" by Academy Award  Winners, Simon Chinn, Dan Lindsay, TJ Martin and Jonathan Chinn, that compared what happened in 1965 in Los Angeles and 1992. Both were race based riots and a discussion with Jane Elliott, award-winning fimmaker, Dream Hamilton, Jamal Simmons, Jelani Cobb . What did it reveal? That again, what is happening today, is not new and has never been new. As an African-American, my parents have often reminded me about what happened in the 1960s. I have lived through two race based riots both in 1992 and now. It was said that the problem is leadership. But it goes deeper than that. What this film reaffirmed is everything that I have recently written about in social media. The sin of slavery and the ideologies of systemic racism,  the psychological warfare that takes place against African-Americans through the justice system, companies, etc. We have to tear down the ideologies or this nation will implode on itself sooner rather than later. We have also seen that when African-Americans do things on their own, some European-Americans go the extra mile to destroy, i.e. Rosewood, Black Wall Street, gentrification. We have had self sustaining towns, banks, insurance companies all because the general public has previously told us, it didn't want to serve us, nor wanted us. The reality, this nation was founded the wrong way and has never atoned to the generations of Blacks who have provided numerous inventions and cultural contributions. Our creations are respected, but we are not. What was said is exactly the truth during the discussion, "African-Americans have never had a good relationship with law enforcement because it was developed out of slavery." The images of LA92 are very raw and hard to watch but a reality and truth is exactly what Dream Hamilton said, "genocide." Jane Elliott said it, "Africans were the first humans and they were explorers and they were Black. They traveled the world and populated it and taught others. There is no such thing as White, only faded. Everyone is an African descendant."  Jane Elliott said it, "Stop showing that clip. What do you think it is doing to Black men and their mothers? Do something about it. And stop the psychological genocide."

You can watch "LA92" on YouTube for free. It is graphic and painful but even more painful that nothing has changed.


#LA92 #nationalgeographic
Posted by Get Your Joy In The Morning! at 9:57 PM No comments: 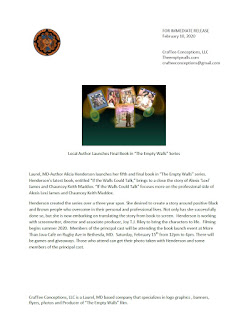 Posted by Get Your Joy In The Morning! at 6:17 AM No comments: 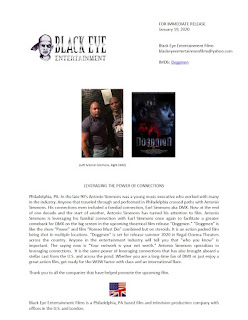 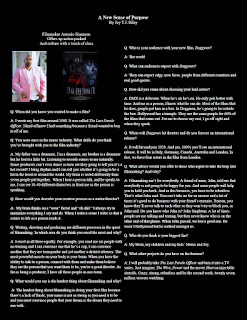 Posted by Get Your Joy In The Morning! at 7:13 AM No comments:

Listed below are active media projects to keep you in the loop.

I am an associate producer on the film "Doggmen" starring rappers/actors DMX and Eric B from Eric B and Rakim, actresses Nahla Da Silva and Paige Meade (both from London) and a host of other actors along with producers Peter Allen from the film "Takers" and Antonio Simmons of Black Eye Entertainment. "Doggmen" is like the show "Power" but on steroids. Production on the film actually began in April of this year but we are ramping up again to film in Atlanta, Philadelphia and Miami beginning this month. We are slated for release in midyear 2020 in Regal Cinema theaters across the country. You can see more on the official Internet Movie Database (IMDb) page for "Doggmen," Instagram @doggmen and the website is www.doggmen.com.

My team and I are filming the pilot episode for the new web series, "Blended Bliss" in early 2020. "Blended Bliss" is a spin off of "Broken Pieces" but is a sitcom (situational comedy) that focuses on life as a blended family with an extra twist. If you haven't already seen "Broken Pieces," it is available on Amazon Prime Video. It is free for those who already have an Amazon Prime subscription.

I am the screenwriter, director, casting director and associate producer for an upcoming film franchise titled "The Empty Walls" currently in the pre production phase. The focus of the film is about overcoming, whether abuse or other personal struggles. We have an updated cast promo video to share to let you know who has joined the project. We will have a major casting call for extras in two cities in 2020. Details will be made available after the new year.

*Please note, product/service/artist placement opportunities are available on ALL three projects. The opportunities are ways to expand a company's or artist's brand awareness and exposure just like seeing Coke or Pepsi prominently placed in a film. These opportunities are another form of marketing and are for those who see the value of investing in themselves.*

Men are anxious to improve their circumstances but, are unwilling to improve themselves; they therefore remain bound. ~James Allen
Posted by Get Your Joy In The Morning! at 5:41 PM No comments:

Get Your JOY In The Morning! LLC, a Media Company, had the pleasure of being in attendance at the National Geographic presents An Evening with Brian Grazer (Academy Award, Golden Globe, Emmy, and Grammy Award-Winning Producer) moderated by Editor-In-Chief Susan Goldberg of "National Geographic Magazine." Brian Grazer is also a New York Times Best Selling Author of the book, "The Art of Human Connection." Brian spoke of honest conversations in Hollywood and even his own mistakes of not truly connecting with those in the room when in the development stage of filmmaking.  In the interview Susan conducted, Brian expressed how a car ride and sudden name drop on radio, Old Dirty Bastard, led to him meeting Wu-Tang Clan and eventually doing "Wu-Tang: An American Saga" on Hulu. His original "curiosity" of East Coast hip-hop that led to befriending Old Dirty Bastard which also led him to meeting Eminem and eventually creating "8 Mile." It was human connection that led him from "8 Mile"  to then meeting Jay-Z and creating "Made in America." He spoke of the complex human connection that really sold the idea of the story about a man working through his mental disability, which we know as, "A Beautiful Mind." From story to story, film to film and television show to television show it is human connection. No matter how you add it up, it is human connection that we all long for and it is the process of exploring the human connection that sells in Hollywood. 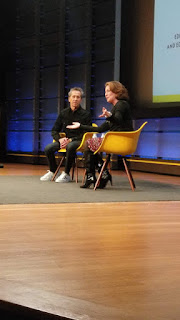 #nationalgeographic #briangrazer #susangoldberg #theartofhumanconnection #hollywood
Posted by Get Your Joy In The Morning! at 12:53 PM No comments: