It Wasn't the Nails

50And Jesus cried out again with a loud voice and yielded up His spirit.
Yield in the Merriam-Webster's Dictionary has a few definitions. A set of definitions are stated as: 1) Not rigid or stiff: flexible 2) submissive, compliant. A synonym surrender is listed. Why is this important? It wasn't the nails that caused Jesus to die. Jesus gave up His spirit. Remember, the guard had gone to pierce his side to help expedite the death of Jesus but Jesus had already done it. Jesus is the same one who walked on water in Matthew 14. He's the same one who healed the sick many times throughout. He turned water into wine. The winds and waves obeyed His command in Matthew 8, a woman touched His garment and was healed, He commanded the fig tree to die in Matthew 21, He fed 5,000 men with two fish and five loaves of bread. By the Holy Spirit He knew the hearts of men and was a prophet. So do you really think it was the nails that held Him to that cross on Calvary?
During my trip to the Holy Land Experience with family, I had the opportunity to see a replica of the nails that were used, the crown of thorns and even the replica of the tomb that couldn't hold Him. What could kill common man, couldn't kill Jesus. What held the common man, couldn't hold Jesus. Jesus even walked, talked and ate with the disciples after rising from the dead. Anything Jesus did regarding His life, was a choice of love. Yes, He allowed Himself to be captured after pleading with God to let things happen a different way. He allowed Himself to be put on the cross. but He really didn't have to stay there. He surrendered His spirit so His body would die the physical death for us. And then He arose so that death couldn't hold your spirit, my spirit and that of our loved ones. The next time you think about the love of Jesus, remember, it wasn't the nails that held Him. 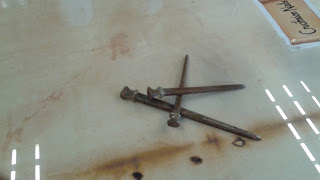 Posted by Get Your Joy In The Morning! at 9:38 AM No comments: