Tonight was the FOX Network DC Screening of "REL" The sitcom is based loosely on the life of comedian and actor, Lil Rel Howery ("Get Out," "Insecure," and "The Carmichael Show.") Rel plays himself in the comedy about a man who loses everything after learning his wife had an affair with his barber.  Rel must now begin the difficult task of adjusting to life after the family separation and "being a long distance dad." The show is set in Rel's native Chicago and also stars Sinbad ("A Different World," "The Sinbad Show," "Jingle All the Way") as Rel's "prideful Dad." Lil Rel Howery is also joined in the cast by Jess "Hilarious" Moore ("Wild 'N Out') as his best friend, Brittany and Jordan L. Jones ("NCIS Los Angeles," and "Wisdom of the Crowd") as his younger brother, Nat who just recently exited jail. The comedy is dealing with real life issues as art imitating life but using comedy to help digest it.

Tonight's screening was moderated by comedian and radio personality Joe Clair of 95.5FM WPGC. In attendance from the cast was Jordan L. Jones. Jones reiterated several times during the Q&A that the objective is to return to a "90's style family sitcom ." For those of us Gen-Xers, the 90s style of almost everything was the best. Jones shared that while his objective is of course to learn his lines, he prepares for the role of Nat by bringing himself to the character. Jones made it clear that he's a faith based man who wants to remain humble.

The series premiere is Sunday, September 9th at 8pm ET/PT on FOX. #RelonFox 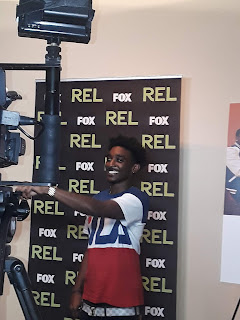