Good Evening,
I pray you are well. Do you know the power of prayer? Do you know people pray for you whom you do not know? The Word says that the prayers of the righteous availeth much. Do you believe it to be so? Did you know there are people who pray for the nation we call home? Do you pray for the place you call home?
On the fateful day of 9/11/01, my Mom was in a building connected to the Pentagon via tunnel. My Mom had taken the elevator and didn't realize she was feeling the impact of the plane which crashed into it until she made it to the first floor, barely. She had just phoned me five minutes before urging me to be careful because of what we all witnessed on TV in New York City. We had no idea the terrorists where coming to where she was. She learned later that a co-worker was on that very plane and another one was on the side of the Pentagon where the plane hit. Her co-workers had died instantly.
I had a co-worker whose husband worked in the Pentagon. I and another co-worker had to muster the courage to tell her what happened and pray her husband had not died. My co-worker at that time was no where near a television or radio so she had no knowledge of the horrific images of terrorism. I learned in the days following that her husband was not on that side of the building but helped to pull out the bodies. Until this day, I still remember the vivid, heart-wrenching descriptions.
I still had the courage to get on a plane bound for a friend's wedding in Jamaica four days after  on 9/15. It was paid for months prior. We ended up stuck on the runway as the government halted ALL international flights. The airline was not allowed to release us but had to put us up in a hotel nearby while all of our backgrounds were being checked. I called my Mom from the hotel room. In tears, My Mom said she hoped I could get far away as soon as possible. I never made it to Jamaica. I had other co-workers attempting to come back from a conference but were stuck in Canada. They ended up returning to the U.S. by bus because flights into the country were banned.  I will NEVER forget that day and the days that followed. But I also know that day could've been much worse had the prayers of a few whom God revealed it to had not gone up. Surely, Amos 3:7 was at hand. Some of you may have your own 9/11 testimonies and I know you will never forget them. I urge you to read the attached request and move to action.
Many blessings to you and your family, 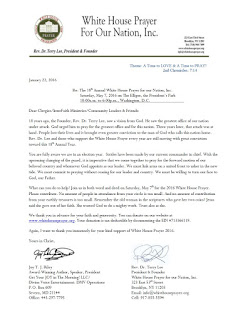